How can we help you today?

Start a new topic
Discussions Sound Bites On the lighter side...

Loudspeaker travelling at twice the speed of sound.

started a topic over 3 years ago

Imagine a loudspeaker, playing your favourite James Blunt song, travelling directly towards you at twice the speed of sound. What would the music sound like?

There is no such thing as a favourite James Blunt song. - Alastair D.

I reckon that because the speaker is moving faster than the speed of sound the song would be “backwards” as the later parts of the song would then arrive at the receiver position before the earlier parts. There would also be a Doppler effect with higher frequency shift. When the speaker passes you then you would then hear the song in the right order but with a lower Doppler frequency shift. Where as if it were black Sabbath we might hear those mythical devil messages that were allegedly audible if you played vinyl backwards.

Our best comment was It would be just as awful but over twice as quick. Everybody agreed that because it is travelling so fast the song would be mercifully shorter (assuming that it stopped on reaching you).

There was also a murmuring of a compression wave that might cause a sonic boom again mercifully drowning out the sound of the singing.

One guy in the office said he didn’t care as he would be wearing earplugs and pretending it was not happening.

Another said he would not notice anything above his own screaming.

Another said don’t be so cruel to James Blunt but was met with universal derision and an alternative suggestion to the experiment - it would be better to tie James Blunt to the front of a Mach 2 fighter jet and see what happens when he tries to sing - reckoning that he could not complete an entire album without dying but saying we should give it a go anyway.

Anyhow this has eaten up a lot of office time and showed Environmental Health Professionals up for the facetious gits we are. - John M. & Co. 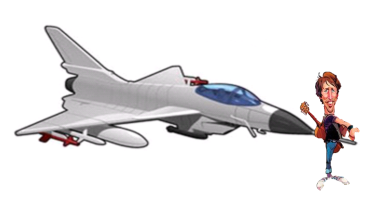 The first sound heard is then a sonic boom as is common with military aircraft flying faster than Mach 1. After that, theoretically, the favorite song would be heard, but pitched down to 1/3 of the original frequencies due to the Doppler effect, and with the sound volume decreasing rapidly.

In practice, nothing would be heard from the song, due to our ear protection mechanisms as well as masking from the environmental background sounds. This would have to be verified by an experiment – DO NOT TRY THIS AT HOME. However, if you have any idea how we could launch a speaker at that speed, let us know.

Again, a warning!!! Loudspeakers travelling at twice the speed of sound have considerable kinetic energy and represent a significant accident risk on impact.

Login or Signup to post a comment
More topics in On the lighter side...
See all 21 topics